Frau Wallace has been nominated by students at Sheffield Girls’ for her enjoyable, new approach to music lessons, by using Soundtrap. On speaking with her, she explained that Soundtrap is an online music studio, which allows you to write music on any instrument, using preset loops, samples of sounds or even recordings made in lesson or at home. This enables students to delve into their creativity and link their prior music knowledge with themes or concept given by the teacher.

Frau Wallace has created various projects using Sountrap with her year 8 and 9 classes. With year 8 she has used a song set, based on Santana’s song called Migra, to which the girls could add their own tracks and use voice/vocals, which they recorded. Additionally, her use of Soundtrap has extended into creating a ‘Haunted Dolls House’ scary track, which many of the girls enjoyed, as it is linked in with their PE curriculum, so they even made a dance to their songs.

Frau Wallace was also asked if there have been any times where something went wrong. As expected with most new technology, the first time Soundtrap was used, it gave her “technical headaches” because students’ accounts would not link up with the schools licence. She was “distraught [that] everything went wrong” but persevered and made sure that she wasn’t “afraid to try something even if it didn’t go to plan!”

What do the students think about Soundtrap?

Students have commented that “they love Soundtrap because they can get very professional results” and were surprised at what they can achieve by using it.

Would you recommend Soundtrap to other music teachers?

“Absolutely! It is such a creative tool that can be used in many, many ways, which can further enrich the students’ learning and interactivity. We have a paid for licence but there’s still so much to do even if you use the free version.”

We salute you Frau Wallace and your comittment to improving your music lessons!

We hope Frau Wallace will keep experimenting and utilising more technology which can further enhance the students adaptability to the constantly changing technological world.

For anyone wondering why Frau Wallace is referred to as “Frau” rather than “Miss, Ms or Mrs”, it is because she used to teach German (as well as Music). Although she no longer teaches German the salutation of “Frau has stuck”. 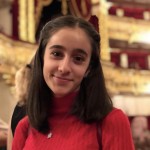 Hi, I’m Alisa, and I am currently in Year 11. I have been part of the Digital Leader time since Year 7, which has allowed me to become a Google Certified Educator Level 1. Over the years I have developed an interest in the newest technology and becoming a Digital Leader has been the perfect opportunity to express this and help others around me. I have also attended two Robotics competitions, and won a best robot design, as well as best research project.
My love of travelling has encouraged me to explore new cultures and learn 4 languages. I have been lucky enough to see various countries in Europe as well as visit India, China and Russia. But whenever I am away I’m always thinking of my Golden Retriever, whom I adore!